The Good: One of the most flexible digital audio workstations on the market, finally available for Windows. Lots of great plug-ins and effects, gives the user more versatility when recording.

The Bad: Very steep learning curve that requires extensive reading, not so intuitive user interface, Windows port could have been better.

The Verdict: MOTU Digital Performer 8 is a great tool, just as its previous versions were. However it really takes time for a user, especially a new one, to master it. This is by far one of its only, and most noticeable flaws.

MOTU Digital Performer is one of the oldest digital audio workstations in the industry. Since it first came out, it has seen numerous upgrades and versions, and all of them established a reputation of a solid and robust audio editing and recording software. MOTU Digital Performer 8 offers more of that same proven formula that has worked so well all these years, with several interesting new features of course.

It's no secret that a lot of audio engineers prefer to work on Apple computers, and maybe that is why MOTU Digital Performer became such a legend. It was a Mac-only application that was never really ported to Windows, but Digital Performer 8 changed that. It is the first version of this software available for Windows machines. The two versions differ very slightly, and those differences are almost all aesthetic in nature. The core of Digital Performer 8 has remained the same.

Compared to other DAWs, you can say that Digital Performer 8 sports a different kind of user interface. The layout is a bit different, and if you're coming from a different platform you will have to spend some time getting used to it. One notable improvement that comes with this latest iteration of Digital Performer, is the 64-bit audio engine that makes everything go much smoother and faster. There is also a dedicated video playback engine that supports full HD video playback. Since it was ported for Windows, it's great to hear that Digital Performer 8 supports the already established VST format, while it comes with 17 new effects and plug-ins.

Speaking of plug-ins, the choice you have with Digital Performer 8 is what makes it one of the best DAWs out there. There are so many effects and instruments to choose from, for example Live Room B allows you to create a realistic virtual studio room where you can imitate the sound an amp makes while being recorded through a microphone. Of course you can move the microphone relative to the amp to gain the tone you're looking for. The library is amazing to say the least.

Digital Performer 8 works alright on Windows operating system, although there are some known bugs that make it look less refined. It's heavy on the system requirements and you will usually need an Intel i5 or i7 with generous amounts of RAM in order to run it smoothly. This may be a bit problematic for users who are planing on installing this on a medium range laptop.

MOTU's Digital Performer was criticized for its steep learning curve, and this is unfortunately very true even with Digital Performer 8. The manual for this software is so extensive that it just turns a lot of people away from using it. On a similar note, people who are already used to using other DAWs will not find it too interesting to start on a new platform from scratch. But those who stick through it get to use one of the best tools the market has to offer.

Objectively, MOTU Digital Performer 8 is a great audio recording and editing software, one of the best available, but the fact that it takes a lot of time to learn makes it less appealing to new users. If you've already used it on Mac, then you will feel at home, otherwise it might be more effective to chose another DAW to get into audio recording, mixing and editing. 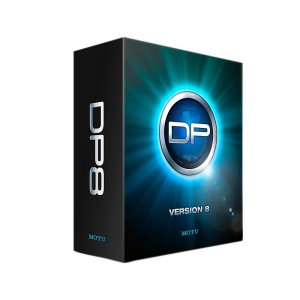