The Good: Both excellent scores in our tests as in the independent labs. The fantastic protection form phishing, ID theft and the transmission of your private data such as financial information and passwords, make it a very complete package. On top of this, Bitdefender provides great online protection of suspicious links on platforms such as Facebook and Google as well as great scan options for your PC or Mac.

The Bad: Not a perfect score on the installation of heavily infested systems. Do not worry though, if your system would be heavily invested, you would not be able to read this.

The Verdict: The best virus scanner on the market today. With great all-round scores, a competitive price, and a solid array of effective and robust security features, Bitdefender is the worthy winner of AlwaysReview gold and the best antivirus software of 2018.

When a company offers their basic antivirus software for free, how should they ever convince their customers of purchasing the paid version? Offer more, a lot more! Bitdefender Antivirus Plus surpasses its free brother in each and every way while offering you so much more, it will make you dizzy. Add to this the extremely competitive price of the virus scanner while beating the competition at great length, and it’s easy to see why Bitdefender is at the top of our list as best antivirus software of 2018.

The difference between Bitdefender’s Plus version and its free version is based on a new innovative technology called Photon. This technology is premised on providing you with greatly improved speed and performance by molding to your system. In essence, it is a malware protector and clean up system that adjusts itself to your specific PC to offer each separate customer a customized solution.

In every antivirus software review, we run several programs on several systems to get comparable results. In our latest and greatest test, the results were very impressive. At an 87% success rate, Bitdefender out performed all 11 antivirus software in our test by a long shot. In some very specific instances, it asked us how to handle specific malware traces. Normally, we are not great fans of this type of questions, as most users don’t know what to do with them. Luckily, Bitdefender makes it very easy: It’s either user ‘proper action’ or no action. You can avoid this, by putting the virus scanner on autopilot mode.

Bitdefender of course not only cleans the malware on your system, it also blocks against new incoming malwares. It does this in a very unobtrusive manner through its browser toolbar.  Whenever you find yourself visiting a malicious site, Bitdefender will divert you to a warning page first, where you are offered the choice to continue or return back to safety. As we tried downloading a range of malware files, Bitdefender blocked an impressive 93% of all files, far higher than the other contestants in our test.

Independent Labs Love it, too!

Don’t just take our word for it. We ourselves check the main independent labs all the time to see whether our test results and antivirus software reviews are coherent with other results. Whichever independent testing lab’s results you choose to inspect, the bottom line remains the same: Bitdefender passes with flying colors as best antivirus software of 2018. An example is the Austrians at AV-Comparatives, a combination of the local government and university, that run tests for weeks to challenge the various virus scanners on hazards they would encounter in practice as well. Bitdefender took the number one spot in the test called Advanced+. And let’s be honest, if the engineers in Austria say it works, well it simply works.

A different lab called AV-Test rates the various programs on Usability, Performance and Protection. In this, the test awards 6 points in each subject. With a near-perfect 17 out of 18 points, Bitdefender beat all other antivirus software in this test as well. Last but not least, Bitdefender earned the prestigious VB100 Certificate in each and every single test (out of 10) run by Virus Bulletin.  We could name a bunch more, but we guess the point is clear: Bitdefender knows its stuff when it comes to malware.

Can the best of the best antivirus software keep your data from falling in the wrong hands? Yes it can. Bitdefender has a specific remedy against websites phishing for your personal data such as financial transfer records and passwords. Most antivirus products are actually fairly bad at protecting from phishing and can’t even beat the SmartScreen Filter which comes as standard in Internet Explorer 8. As a comparison standard, we usually use Norton phishing protection, which sets the industry standard. Bitdefender is one of the few programs able to beat Norton’s score.

Why choose Bitdefender Antivirus Plus 2018 as your antivirus software?

Want to know more about Bitdefender Antivirus Plus? 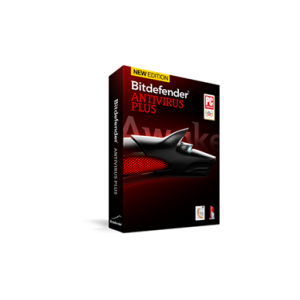